Since starting this blog last May, I have discovered many new ingredients as well as new ways of preparing old favorites. This weekend I decided to combine three of my favorite “new” foods to create a homemade cereal dish that is bursting with flavor and nutrition. The cereal base includes popped amaranth and buckwheat groats, and is topped with a pistachio cream.

There are many steps in the process of creating this unique breakfast dish, but it can be made ahead and all of the parts will keep in the fridge for a week or so.

After two weekends away from my kitchen, let’s just say I went a little crazy on Saturday morning, whipping up this and that! The first step is to pop the amaranth. Heat a pot until water “dances” when flicked on the surface, add about 2 Tablespoons dry amaranth, cover with a lid, and shake the pot until the amaranth has popped. I made about 5 batches to get 2 cups of popped cereal. Next, prepare a batch of pistachio milk using 1 cup soaked pistachios and 2 cups of water.

Now you’re ready to assemble the cereal and the pistachio cream. Combine all ingredients in a blender and process until very smooth. Combina all ingredients in a bowl and stir to combine. I topped my cereal with sliced banana, frozen raspberries, and coconut flakes before pouring about 1 cup of the pistachio cream on top. I love mixing things up in the mornings and starting my day with a wide variety of flavors and textures. This hearty bowl of “cereal” and “milk” certainly fit the bill. It’s a new year. A new beginning. For me, that is a huge relief. The end of 2012 was more than a little challenging, so the idea of a fresh start is very appealing. Already this year, I’ve gotten a new haircut (I got bangs!), made some new friends, and adopted a new “come what may” sort of attitude. It’s exciting.

I was talking with a good girlfriend the other day about life, love, and New Years resolutions. We started laughing at the “crunchy granola” nature of my musings. Since that phrase came up, I have been craving actual granola. The flavor of this batch was decided primarily by what was stocked in the bulk bins… apricots, pistachios, walnuts. I decided this combo was a safe bet, since Lindsey has been enjoying the bag of Apricot Pistachio Marge Granola I recently gave her. I’m definitely pleased with the outcome. Preheat oven to 300F. Combine oats, nuts, coconut, and spices in a large bowl. Melt coconut oil and honey in a small saucepan over low heat. Pour over oat mixture and toss until evenly distributed. Spread the mixture onto a large baking sheet. Bake 20 minutes, stirring occasionally. Mix in apricots, stirring to break up any clumps. Return to oven for about 15 minutes, stirring frequently. Cool, and enjoy!

Stirring in the apricots

Since the coconut was sweetened and I knew I’d be serving the granola with fruit, I cut the amount of other sweeteners pretty dramatically. If you prefer sweeter granola, add 1/3 cup packed brown sugar to the oat and nut mixture. I love that yummy food came from my “crunchy granola” thoughts. What are your New Years resolutions? Have they influenced your meals lately?

I love biscotti as an afternoon or after dinner snack, especially with a latte or a glass of almond milk. I went through a phase when I lived in New York where I ate biscotti on pretty much a daily basis. Trader Joe’s makes a tasty chocolate dipped variety, and almost every coffee shop sells biscotti. But I had never made my own until this weekend. Biscotti are twice-baked cookies. If you sample them after the first phase of baking, they taste just like a typical crunchy on the outside, chewy on the inside cookie. The second phase of baking makes them super crunchy and perfect for dipping. Slicing the log after the first phase of baking

As part of my New Year’s Resolution to learn more about the ingredients I use, my first rule is “no assumptions.” I will not assume I know about an ingredient, but rather, I will research all key ingredients to really learn about them.

For example, I know that pistachios are those little green nuts that typically come in shells (unless you have bulk bins that sell them already shelled!), and are lower in fat than other nuts. But how do they grow? What vitamins and minerals do they contain? Pistachio: Cultivated in California, Turkey, Italy, and Iran, pistachios are an important culinary nut that has been used for thousands of years, as far back as 6750 BC. In the U.S, pistachios have been cultivated as a commercial crop since the 1930s. The pistachio nuts we eat are the seed of the plant, contained within the hard, whitish/beige shell of the fruit. When the fruit ripens, it splits open, revealing the seed. Compared to other nuts, pistachios have one of the highest amounts of protein and fiber. They also contain important vitamins and minerals including copper, manganese, phosphorus, potassium, Vitamin A, thiamine, and Vitamin B-6. Dried Cherry: The cherry tree was named after the Turkish town of Cesarus, and is said to date back to 300 BC. Cherries come in two varieties: sweet and sour, both of which can be dried and eaten as a snack or used in baked goods. The red pigment in cherries, anthocyanin, is being studied for its antioxidant properties. I was surprised to see that Culinary Artistry does not list cherries and pistachios as a common flavor pairing. In my opinion, they are quite a complimentary pair.

In addition to the lovely flavor combination of pistachios and cherries, these biscotti have a hint of orange due to a little bit of zest added to the batter. I love the subtle complexity that this hint of citrus provides. It keeps the biscotti feeling light and refreshing, while the whole wheat flour and oats also ensure that they are slightly heartier and more filling than the average baked good. Ready to be baked again! My only complaint against homemade biscotti is that they have to bake for quite a long time, so you have to plan ahead when making them. However, the hands on work is simple, so they’re perfect for making on a lazy Saturday afternoon. I’ll be making more soon, potentially dipped in chocolate ;-).

Do you like biscotti? Any favorite flavors or drinks to dip them into? 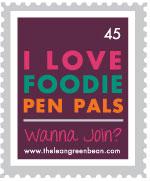